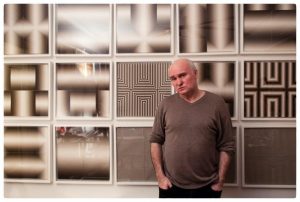 Janusz Kapusta is a Polish artist, living and working in the United States. He was born in 1951, in Zalesie, Poland. He graduated from the High School of Fine Arts in Poznan and later on, from the Department of Architecture of the Warsaw Polytechnic School. He studied the history of philosophy at the Academy of Catholic Theology in Warsaw. He is interested in Mathematics and Philosophy.

His work ranges from small graphic forms, posters, magazine illustrations, graphic design, book illustrations, to set designs and painting. Since 1981 Kapusta has been living in New York and his illustrations appeared in “The New York Times”, “The Wall Street Journal”, “The Washington Post” and others. He also contributed illustrations for “The Captive Mind”, published by The Limited Edition Club (1984), a book by the famous Polish writer and Nobel laureate Czeslaw Milosz.

In 1985 Janusz Kapusta discovered a new geometrical shape – an eleven faced polyhedron, which he called the K-dron.

In 1999, the exhibitions entirely devoted to K-Dron opened at the Museum of Modern Art in Lodz, Poland. At the same time the Actor and Puppet Theater in Katowice, Poland staged a play called “Planet K-Dron, the Mystery of Interrupted Journey” Kapusta being the author, set designer and director.

In 2000, the artist discovered new, earlier unknown principles of the golden proportion and presented them at mathematical conferences in American Universities. His articles have appeared in math periodicals in the United States and Japan.

In February 2002, Kapusta accompanied by the director Lech Majewski and his wife Maria Katarzyna Szarlat, the costume designer, took part in the staging of “Carmen” at the National Opera in Vilnius (Lithuania). In the same year, Kapusta, as one of 22 world artists, was invited to participate in the International Exhibition in Zagreb (Croatia) in order to restore the Museum of Art in Vukovar which had been destroyed during the war.

In May 2004, Kapusta won a Grand Prix in an international competition in Ankara commemorating the 80th Anniversary of the Turkish Republic. His works can be found regularly in a leading Polish newspaper “Rzeczpospolita” from 1995 to the present. As a visiting professor, Kapusta collaborates with the newly established School of Visual Art and New Media in Warsaw.