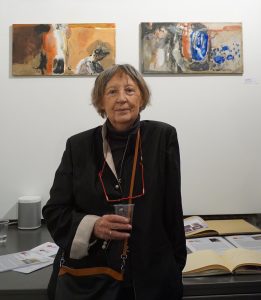 Janina Muniak at the opening of the exhibition “The City of Women”. ©Galerie Roi Doré

Janina Muniak was born in 1935 in Warsaw. She comes from a noble,  intelligentsia family with strong musical traditions (her grandfather was conductor, her mother pianist and student of Yakov Zak, and her father was a professor at university). She graduated from the Fine Arts Academy in Warsaw, where she was a student of Eugeniusz Eibisch. For a year, she also studied textile and for two years, graphics under Jozef Mroszczak and Julian Palka. Muniak arrived in Paris in September 1963 and quickly decided to settle there.

Already in 1961, the artist started working as a graphic designer and illustrator, creating among other things, children’s book illustrations. When she arrived in Paris, she continued to work as a graphic designer for agencies and magazines (during many years she collaborated with the periodical Art Press, she was also designing packagings, textiles and graphic charts for companies such as SNCF).

Janina Muniak exhibited her works for the first time during group shows at the Zacheta Gallery in Warsaw and at Warsaw University in 1961. However, her departure for France interrupted her artistic career because she devoted herself mainly to graphic design. It wasn’t until the early 1990s that she resumed her artistic work. Since 1994, – the year she received a prize in the “pastel” category at the Autumn Salon of Fine Arts at the Chapelle Saint-Jean – she regularly presents her works in solo and group exhibitions.

During her studies, Muniak created mainly oil paintings. Afterward, and for a long time, she focused on small ink drawings, before moving onto the large pastels. In recent years, she started using acrylic paint to realize her works. Her main source of inspiration – whether pastel or acrylic – is, as the artist herself said: “observation of nature, of trees and the constantly changing sky”. Her works “are an attempt at expressing the atmosphere and light – play between sunset and dusk. An attempt at expressing the contrasts between the light and no-light, movement and tranquility – as it often happens on a field or in a forest”.