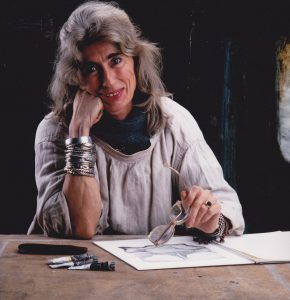 Joanna Wierusz-Kowalska was born in 1930 in Vilno. She grew up in a family with strong artistic traditions: her father, Czeslaw Wierusz-Kowalski (1882-1984) was a painter and her grandfather, Alfred Wierusz-Kowalski (1849-1915) was a prominent representative of the Munich School. In 1950-1955, Joanna Wierusz-Kowalska studied conservation at Warsaw Academy of Fine Arts, under Bohdan Marconi. Then between 1955 and 1960, she studied painting with Artur Nacht-Samborski. In 1962, she settled permanently in Paris, where she was close, on the one hand, with Polish emigration sphere – with artistic bohemian, like Roman Cieslewicz or Alina Szapocznikow and „Kultura” circle – on the other hand, with representatives of Parisian artistic communities like André Breton or Salvador Dali. In Paris, Joanna Wierusz-Kowalska opened her own conservation studio, which offered her financial independence and also helped other Polish artists, including Arika Madeyska, to work and support themselves.

After a figurative period, inspired – especially in her early works – by Nacht-Samborski, Wierusz-Kowalska turned to abstraction. Over time, dark colors and irregular shapes gave way to more and more luminous structures: tunnels and circles which seem to lead us inside the painting and at the same time become a gateway to a secret dimension, a different reality of our world. Joanna Wierusz-Kowalska has exhibited her work many times in group and solo exhibitions in France and Poland. Her works are part of the collections of the National Museum in Wroclaw, Museum of Fine Arts Academy in Warsaw, departmental museums in Suwalki and Bialystok and of the private collections in the United States, France, Belgium, Sweden, Austria, Italy, and Canada. The artist died on April 25, 2005, in Paris.