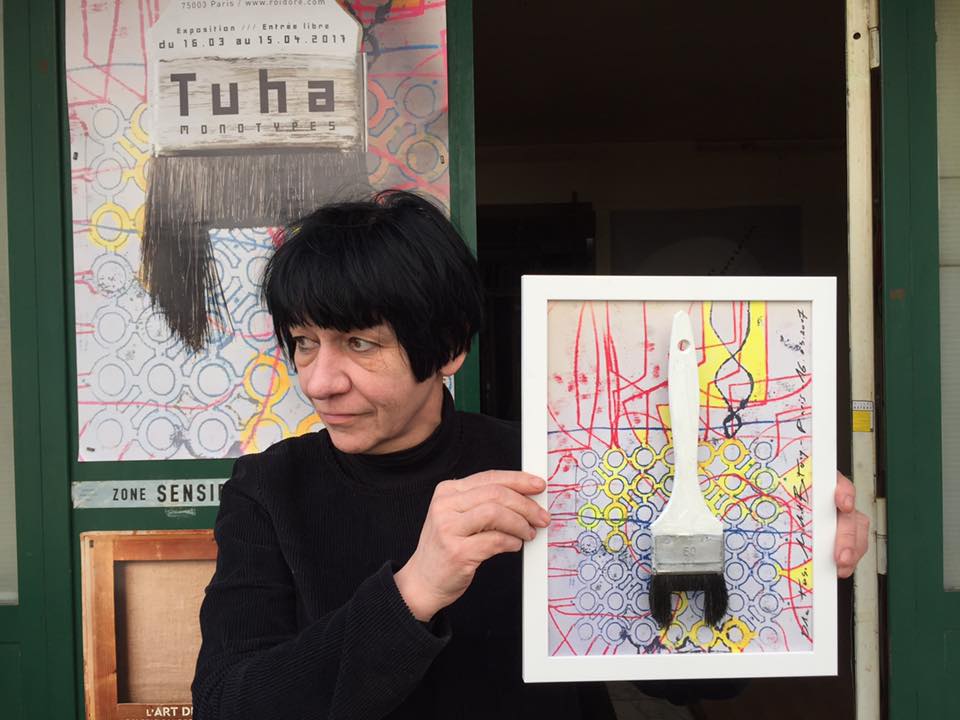 Justyna Tuha is a Polish artist, living and working in Germany. She was born in 1956 in Katowice, Poland. From 1975 to 1980, she studied graphic arts and painting at the Fine Arts Academy in Cracow. Since 1986, she lives and works in Germany (currently in Düsseldorf).

Her favorite technique is the monotype, a process of printing without engraving, producing a single print. On a smooth surface, the artist spreads the printing paint with a roller, then covers it with paper on which she draws with a pencil or another tool, thus obtaining an artwork halfway between the print and the original. This technique, that she learned to master perfectly with time, allows her to create complex compositions, in which the line – soft or fleshy, shaded or sharp and incisive, depending on the thickness of paint, its consistency, and on the used tools – is no longer a decorative element – is no longer a decorative element, but it structures and rhythms the composition, ensuring its an enormous lightness. The technique of the monotype is a deliberately directed process in which controlled accidents of multiple layers and line’ expression take us in vague spaces of matrix and rhythms of writing, which allows the artist to obtain a plastic sensuality.

Moreover, the artist makes judicious use of color, which serves as an optical amplifier, sometimes seeming secondary to the line – but playing an important constructive role none the less – other times invading large surfaces like in Colorfield painting. Using these two elements, and because of the particularity of the technique which introduces an element of an accident into the artistic process, Tuha creates works becoming independent worlds; surprising and complex structures where a spontaneous gesture deconstructs the form’s discipline.

Tuha’s works are a kind of ordered chaos: at first glance, the lines seem sometimes tangled, swirling and unstable, but when we stop to contemplate them a few moments, we see the subtlety of composition. Each element is considered and chosen with care: line, color, and texture, because she likes to play with the effects of matter and texture, giving her works an aspect of glossy or matte and choosing classic colors or fluorescent, silver or gold.

It is in abstract art stylistic that Justyna Tuha finds her artistic expression. However, although she is a non-figurative painter, she remains attached to reality and draws her inspiration primarily from the poetry of the contemporary world. Through the use of contemporary symbols, codes, and logotypes, her works evoke the traces of everyday life. She often works in series, as in the case of Letters referring directly to the formal letters, Manuscripts in which she codifies in some way the graphic form of her own writing, Japanfeuilles or subway tickets. These works evoke the typical forms of some particularly important objects, eg. a metro ticket, finding its source both in the personal experiences of the artist, as well as referring to the experience of contemporary man. After a short stay in Paris, the artist found in her pocket a metro ticket; the sight of the magnetic stripe initiated an emotional and creative process in the artist. In reality, this object is an extremely rich source of references, starting with the format and the shape of the magnetic stripe, through the traces and dirt on it, to all the ways to use it: triturate it in the pocket as a kind of antistress, write a phone number, scribble on it… And yet, this little piece of paper is used to travel throughout Paris, it is a link between places and people. Therefore, the metro ticket and its magnetic stripe, become the starting point of a poetic journey, which resulted in a series of 50 works entitled Métro-poems.

However, Tuha’s works do not illustrate the reality, but they evoke in a way everyday life, on one hand, by calling into question the visual habits of a contemporary man, and on the other hand, by taking us in a graphic, poetic and at the same time symbolic journey, in which a line is a starting point.