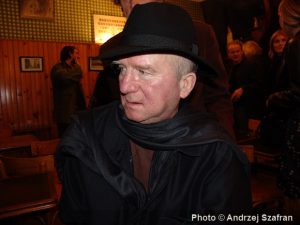 Pawel Jocz was a Polish sculptor, draftsman, illustrator of books and volumes of poetry, art critic. He was born on May 6th, 1943 in Vilnius. He graduated from the Academy of Fine Arts in Warsaw. In 1970 he settled in France, where he lived and worked until his death.

The first foreign solo exhibition of Pawel Jocz took place in Sweden in 1967. Afterward, his artworks have been presented at dozens of solo and group exhibitions in many European countries, e.g. in France, Belgium, Sweden, Luxembourg, and Poland. He exhibited his works regularly at the Salon de Mai at the Grand Palais in Paris.

He is the author of sculptures dedicated to prominent composers and musicians, e.g.: Ludwig van Beethoven, Arthur Rubinstein or Alexander Tansman, as well as memorial sculptures: “Peoples’ Solidarity” (Wielsbeke in Belgium), “The Elevation” or “Poet’s Cloud” (Boulogne -Billancourt in France). He also designed the monument of Cyprian Kamil Norwid (prominent Polish poet, dramatist, and painter) situated on the Norwid square in Paris. Jocz’s sculptures and drawings are part of collections of many museums and private collectors in Poland and France.

Despite the gradual weakening provoked by the illness, Pawel Jocz remained filled with the joy of life during his last years. He died on October 21st, 2008, in his atelier in Boulogne-Billancourt.

A human being has always been central to his artistic practice: modern man – as he said – whose life has been marked by all the traces of our epoch.