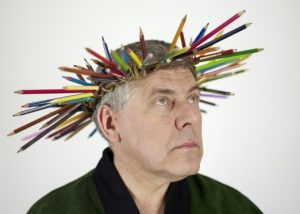 Stasys Eidrigevičius is a Polish-Lithuanian artist, born in 1949 in Mediniškiai, Lithuania. Eidrigevičius graduated from the College of Fine Arts and Crafts in Kaunas in 1968. In 1973, he obtained his diploma from the Vilnius Academy of Fine Arts. In 1980 he settled in Poland.

He is a versatile artist, active in many fields, such as oil painting, book-plate, book illustration, poster design, theatre set design, studio graphics, and photography. At the beginning of his career, he focused on book art-miniatures, bookplates and book illustrations. Later on, he started creating masks, pastels, tempera, ink drawings, oil paintings, and sculpture. He has been inspired by different phenomena such as the art of American Indians or Japanese calligraphy and folk tales. Performer, author of stage settings, installations, and objects, he also turned to photography and theater directing. His first play was “White Deer” (1993) staged at the Warsaw Studio Theatre; then the same theatre ran his play, “Wooden Man”, devoted to the creative process and the artist’s early years in Lithuania. He has also been involved in projects mixing art and music and has published a series of drawings and poetic miniatures Erotica.

He received numerous awards for his work, among them the Grand Prix for book illustration in Barcelona, Spain (1986); Grand Prix at International Biennial of Posters in Lahti, Finland (1989); 3rd Prize at International Biennial of Posters in Warsaw (1990), Gold Medal in Toyama, Japan (1994), 1st Prize at Biennial of Polish Poster, Katowice (1999), National Award in Arts, Lithuania (2001). He also received many national Lithuanian and Polish orders and awards: Gedymin Order (2000); National Art Award (2001); Doctor Honoris Causa title by the Academy of Fine Arts in Vilnius (2009); Silver Medal for Merit to Culture “Gloria Artis” (2010) and the Commander’s Cross of the Order of Merit of the Republic of Poland (2019) from the Polish Ministry of Culture and National Heritage.