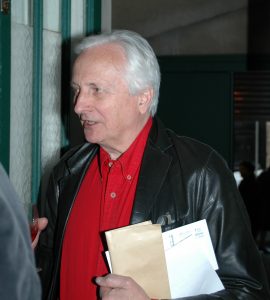 Witold Zandfos is a painter, architect and town planner. He was born in 1938 in Warsaw. In 1963 he graduated from the School of Architecture as well as from the Warsaw School of Fine Arts, where he was the disciple of Bohdan Urbanowicz. The same year he moved to Paris.

Between 1965-1970, he formed “MIASTO” with Michel Lefebvre and Jan Karczewski, group engaged in the search for futuristic urban forms, rewarded in several international events and especially in the II Biennale in Paris (1965) and the Grand Prix International of Town planning and Architecture in Cannes in 1969 and 1970. From 1971, he participated as a town planner in Sénart town project, in the construction of the New Towns, being back then the places of the renewal of the town planning in France. In 1983, he created his own architecture and town planning agency, which since then build around thirty public buildings (high schools, colleges, schools, theaters, media libraries, sports buildings) as well as numerous housing operations and the development of new city ​​districts.

He has been painting since the age of 16 and his works. As he explains, “I create my paintings using mixed techniques, acrylic paints, anchors or collages, on canvas or on paper, using tracing papers, packaging papers or architect’s plans. By scraping, rubbing, waxing or ironing surfaces, my works obtain a special texture with effects of transparency “- Witold Zandfos