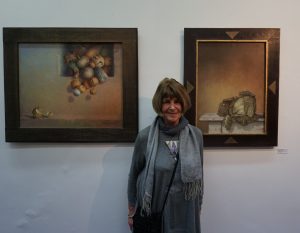 Zofia Szalowska at the opening of the exhibition “The City of Women”. ©Galerie Roi Doré

Zofia Szalowska was born in 1935 in Warsaw. She studied poster art under Henryk Tomaszewski and graphics under Jozef Mroszczak at Fine Arts Academy of Warsaw, from where she graduated in 1959. A year later, she traveled to Paris where she met many Poles living in the French capital and decided to settle there as well. Szalowska worked for many years as a graphic designer and only devoted herself to painting at the end of the 1960s. Since 1975, she participates in many group exhibitions in France, England, Switzerland, United States, and Singapore and since 1981 she also exhibits at the solo shows. Her works are part of both public and private collections in France, Spain, Belgium, Switzerland, Poland, the USA, New Caledonia, Singapore, Germany, and Italy.

In the 1960s and 1970s, Zofia Szalowska was realizing mostly portraits (both of people and animals) on order, which had great success with customers worldwide. Her oil paintings were inspired by the naive and primitive painters – especially those of 19th century Americans representative of this trend. Despite her success with collectors, at the end of the 1980s the artist undergoes a radical change, both technically and thematically speaking. Firstly, she abandons oil painting and starts using the acrylic, which gives her new opportunities. Furthermore, inspired by her husband, Pierre Ducordeau’s – a trompe-l’œil painting specialist – work, she renounced the art of portrait, which dominated in her work until then and concentrated on illusionistic still lifes and landscapes.

Small-sized drawings are always the starting point of her illusionistic paintings. However, with time, works on paper became independent pieces: deformed human, animal and hybrid figures which dominate them, bring to mind some of Witkacy’s and especially Lebenstein’s art. In recent years, Szalowska also creates collages, therefore entering a dialog with the pictural tradition of the  20th century – by the fact alone of using the collage technique – and above all with her own art. Not only in those works, human and animal figures – present in her portraits, but absent from trompe-l’oeil still lifes – reappears, but above all else the artist changes radically her style, passing from illusionistic painting to collage, which emerged at the beginning of the 20th century and became a symbol of breaking with the traditional rules of art and especially with the illusionistic painting.

Zofia Szalowska died in Paris in 2017.