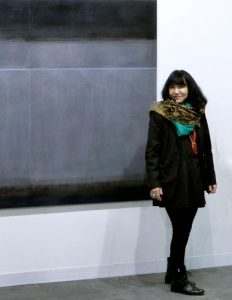 Aliska Lahusen is a Polish painter and sculptor. Born in Lodz, she now lives and works in Paris and in Burgundy. In 1972 she graduated from the Fine Arts Academy in Warsaw. The same year, she moved to Geneva, Switzerland, then she settled in Paris where she completed her studies.

Lahusen creates lead and glass sculptures, deliberately simple-shaped but distinguishing themselves from the Minimalist artworks by their spiritual dimension. In the same spirit, Lahusen also produces large-scale monochrome prints on lead sheets. Since 2004, she has been developing her expression through the use of traditional Chinese lacquer in two- and three-dimensional works of medium and large format.