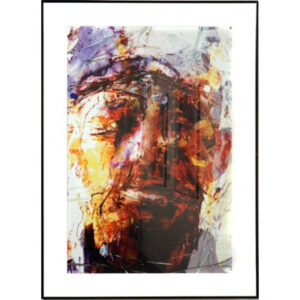 Artur Majka was born in 1967 in Tarnow. Since 1992 he lives and works in Paris. He graduated from the Cracow Polytechnic School in architecture and from École Nationale Supérieure des Beaux-Arts in Paris. This versatile training is reflected in his art, both through the use of different techniques including acrylic painting, photography or silk-screen printing (among many others), but also by the diversity of his professional experiences. Indeed, Artur Majka is not only a painter and photographer but he also works as a graphic designer: he realizes illustrations for various publications and he is the author of many posters. Moreover, he often mixes several techniques and styles in the same work, which allows him to obtain a plastic and aesthetic originality, and gives him a new artistic dimension. At the same time, the artist remains faithful to his education: independently from the technique used, the line is always the basis of the composition of all his works. It is both the starting point and an integral part of the result, also – or perhaps above all – in the works that are at the limits between figuration and abstraction.

Artur Majka regularly exhibits his work in Poland, the USA and in France. Since 2010, he has been associated with the Galerie Roi Doré, for which he created its first logo and where he has presented his work several times (at individual and collective exhibitions).

In June 2017, he won the 3rd edition of the Tadeusz Malinski “NanoArt” Contest, with his sculpture “The Parallel Existences”.