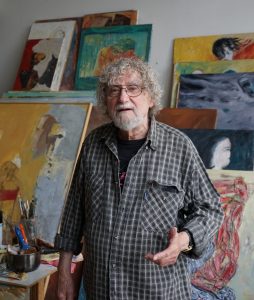 Henryk BUKOWSKI (born BUCZKOWSKI) was born in 1932 in Lorraine in a Polish family. In 1951 he settled in Poland, where he started his studies first at the High School of art and then at State Art School in Lodz. This “Polish period,  lasting 10 years, was a true « return to the roots », (…) dictated maybe by the artist’s wish to find his own « emotional homeland »” (A. Nakov, Henryk Buczkowski). Bukowski graduated in 1960 and already as a student he started working at the State Art School in Lodz as professor Modzelewski’s assistant and actively participating in cultural life, among others « in the events at the School in Lodz, where the Malevich’s tradition was still alive, in the memorable exhibitions of the Warsaw Writers’ Club, in the big retrospectives in Sopot, Danzig, Wroclaw… In those circles, painting was not an « artistic production » and even less a commercial value. (…) It was an intellectual stake, a life of the whole young generation, searching to liberate its memory from the too cruel and too heavy recollections.” (A. Nakov, Henryk Buczkowski).

In 1962 Bukowski settled in Paris, where he started experimenting with form and color, juxtaposing powerful strokes of the brush and colorful lines with the monochromatic background. In his paintings from the 1970s, the artist tends toward abstraction, focusing above all on the thick matter and on the contrasts between large, monochromatic surfaces and colorful patterns.

In 1982 Bukowski started a long period of travels: during the next eight years, he lived among other places in Kinshasa (Zaire), Los Angeles (where he lived between 1983 and 1989) and Normandy. All the while he continued his artistic research on the contrasts between colors and between the smooth parts and the thickening of the matter, which results in the apparition of elements in relief.

In 1990 Henryk Bukowski returned to Paris, where he lives today. In the 1990s and 2000s, the artist experimented with contrasts of colors and smooth/thick matters, creating his own techniques and using specific materials, such as sand.

Bukowski has exhibited in numerous individual and collective exhibitions in Canada, France, Germany, Holland, Italy, Poland, and the United States. His art was and is widely acclaimed both by the critics and the public.