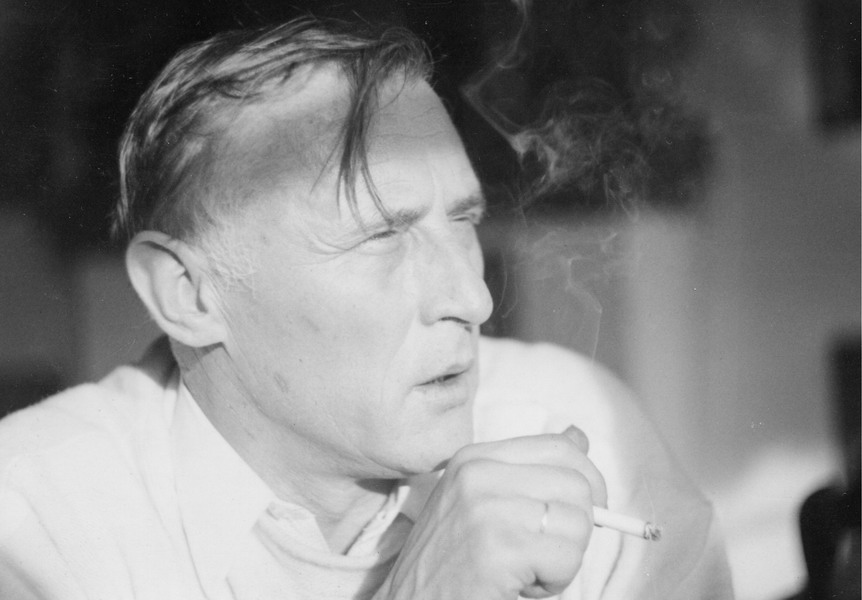 Witold Januszewski was a Polish artist, who spent most of his life in exile. He was born on January 2nd, 1915 in Grodno (Belarus, then part of Poland). He studied at the Academy of Fine Arts in Warsaw. In September 1939 Januszewski fought in the Polish army against the Nazis and after Poland’s defeat, he managed – through Hungary and Italy – to reach France. He lived in different internment camps for Polish soldiers in South-West France and was an active member of the Polish resistance network “Monika”. In the internment camp in Livron, Januszewski made his debut as an illustrator, working for the clandestine journal “Wrocimy” (We’ll be back), which he co-founded along with the polish poet and publicist Jozef Lobodowski.

In 1943 Januszewski escaped the internment camp in Livron and went to Toulouse, where he married Felicja Borkowska. After the Nazis took control of the “free zone”, the couple managed to slip across the border in the Pyrenees undetected, hoping to reach London via Portugal. Ultimately, the couple stayed in Barcelone, where they lived for the next five years. It was in Spain that, just after the war, Januszewski made his true artistic debut by showing his works at two solo exhibitions. However, the most important part of his artistic work was created in France, where he returned in 1947. In 1959, after losing all hope to ever being able to return to Poland, Januszewski decided to stay for good in Paris. He continued painting, but also worked as an illustrator for press and for both Polish and French publishing houses, designed stage sets for theatre and participated in many collective exhibitions. However, all those activities didn’t ensure him the means to support his family, so for the next fifteen years, Januszewski worked as a simple worker at the BP concern. Despite those difficult living conditions, he never quit painting and continued to show his work regularly. His last individual exhibition took place in Gallery Lambert (Paris) in 1974.

Januszewski died in 1981 in Ermont. After leaving Poland in 1939, he never saw his country again, even though he stayed forever profoundly connected to it. In 2004, the year of Poland’s accession to the European Union, the Lez’art interventions association begun promoting Januszewski’s work, organizing four exhibitions in Paris and other French cities during the Polish Season in France „Nova Polska”. Other exhibitions of the artist were organized in 2007-2010 in Polish museums and in collaboration with the French Embassy in Poland. In 2011, one work of Januszewski was shown at the exhibition „Polonia. Poles in France”. The same year, Galerie Roi Doré exhibited artist’s two works at the collective show „Chased from paradise”. In 2014 Polish Library of Paris, in cooperation with the Lez’arts interventions association organized the exhibition „Vibrations”, showcasing Januszewski’s works on paper. The exhibition „What  the birch bark told me”, organized by Galerie Roi Doré at the occasion of the Januszewski’s centenary, presented the choice of artist’s work from 1960-1970.