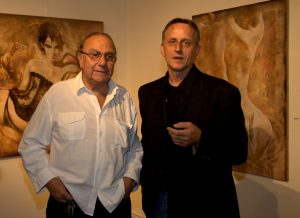 Yarek Godfrey (also Godfrey.ow or Jaroslaw Godfrejow, real name Jaroslaw Pawel Nowicki) was a Polish artist of French, British and Austrian origins), born on April 8th, 1957 in Olsztyn, Poland. In 1982 he graduated from the Academy of Fine Arts in Cracow and the Studies for Stage & Costume design for theater in Cracow. In 1983 he moved to Paris, where he lived until his death in 2014.

Godfrey received numerous awards for his work (among others, the Gold Medal of the XXXVIII Salon of Young Artists, Grand Palais, Paris, 1987; Grand Prix of the XXVI International Art Salon Côte d’Azur, Cannes, 1990). He presented his work at numerous group and individual exhibitions, primarily in the United States and France, but also in Belgium, Monaco or Italy. He died tragically on March 28th, 2014.